Creation out of your stock 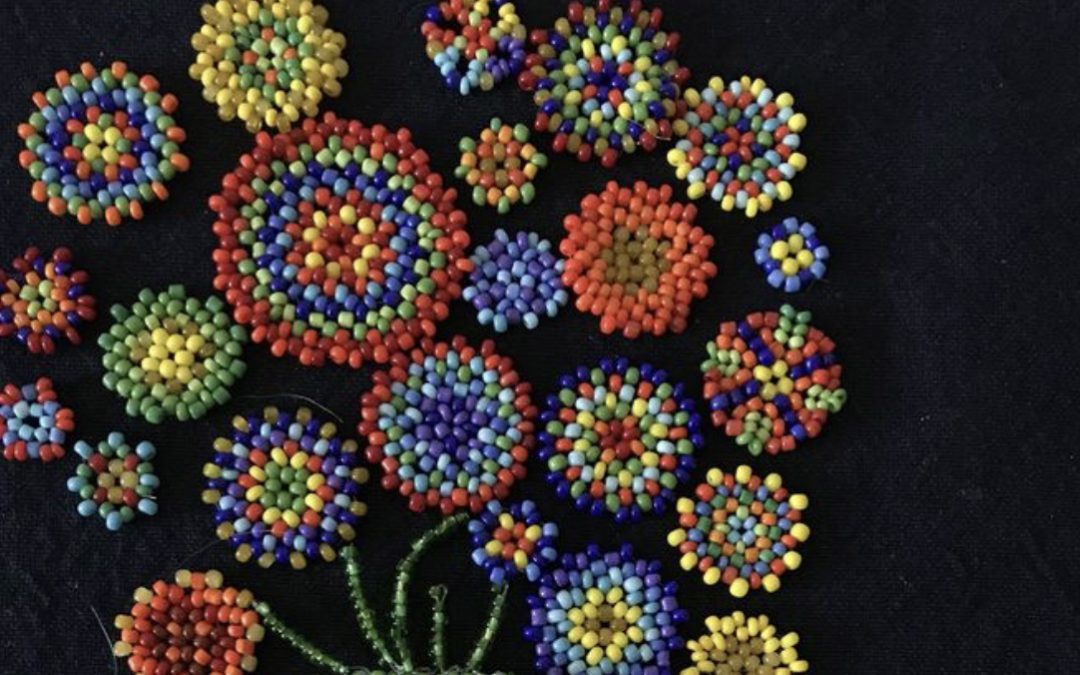 This is a a blog by Madeleine Eerdekens, who showed us a beautiful painting made of beads. She found them lying around the house and started working with them. It is placed on a canvas board and protected by a picture frame. It took about 3 months to finish, with every flower strung in round flat peyote stitch.

Hello, my name is Madeleine and I am going to tell you something about how this piece was thought of, how it was made and what difficulties I encountered along the way.
A long time ago I already worked with beads, it could easily be more then 20 years ago. In the meantime I am retired and with the long winter ahead, it started to itch again. I took my beads and started. Thanks to the internet there is such an overload of information that the ideas accumulated.
So I randomly bought a supply of pearls again but … I was brought up with the thought that nothing should be lost from the beads that I still had. So what could I make with my old supply of pearls, which was really a hodgepodge of colors, also with different sizes. I couldn’t do big projects because then I didn’t have enough pearls of the same kind or color.

Thanks to making a ‘beaded bead’ I came up with the idea of ​​making small flowers, making each of different colors. It was a challenge to make every-one different, but it worked.

In the beginning I worked on a dark blue canvas as a mat. I found the result so beautiful that I decided to use that blue cloth as a background and start sewing all those flowers. I like to try something else too, so I made a piece of loom as a tribe. This became a tree.

Now I had a problem, I didn’t know how to fill the space around the tree nicely and the blue canvas is not strong enough. How could I strengthen and tighten it? Then came the idea to use a canvas for painters, it is sturdy and sits on a frame. And it’s cheap . Even though it is white, I wanted to try it anyway. The size was 30 x 30 cm. And because I wanted to cover the entire surface with pearls, I abandoned the idea of ​​the tree.

I then put my flowers of pearls on the canvas, again and again until I felt it was right. I also used the color white to make flowers but this was really not beautiful, these flowers had to go out.
The first flowers are attached to the canvas with a few stitches. Then I started making more flowers depending on the size of the openings to be filled and the color of the surrounding flowers.Finally I started sewing around the flowers, further and further until everything was filled up. I worked against the wooden edge of the frame.

Afterwards I removed the canvas from the frame and cut it out to the size of a photo frame. My work is now protected against dirt and dust through the glass. Hope you like it!